The church enclosures of Finistère are spectacular pieces of architecture, marking progress from the material world (the village beyond the church) to a more spiritual realm. Patricia Stoughton has been exploring the far end of Brittany to unravel the symbolism and stories of the enclos paroissiaux (parish closes).

The effect is extraordinary. First-time travellers to west Brittany cannot fail to wonder why some village churches seem so grandiose and out of proportion to the modest villages that surround them. Almost surreal. But what visitors are seeing is the rich heritage of a seventeenth-century rural society that prospered in the linen trade. Not wishing to take their passage to heaven for granted, and driven to some extent by pride and rivalry, entrepreneurs known as Julots built the Breton parish closes. And built them with a distinctive combination of elements unknown in other parts of France.

There are over seventy parish closes (enclos paroissiaux) in Brittany, most of them in Finistère and most of these in and around the valley of the river Élorn to the east of Brest. Each close has an encompassing wall to mark the sacred space and to keep farmyard animals out. Usually there is a stepped entrance, triumphal arch, calvary, ossuary, cemetery, and a south porch. Inside, though they share features found in churches elsewhere, the baroque and often fantastical design of the beams, baptistries and retables is particular to the enclos churches. Some are more interesting or impressive than others, some have lost original features but each has a strong stamp of individuality.

The way to discover their astonishing craftsmanship is not by an exhausting, mammoth tourist circuit, but by quietly visiting just one or two churches in more depth. In fact, early visitors had to do just that. Brittany had been more or less cut off from the Paris hub until the railway to Brest opened in 1865, bringing tourists to a new station at Saint-Thégonnec. Among them was inveterate victorian traveller, Fanny Bury Palliser, who describes driving to visit the église Saint- Thégonnec in a “rickety two-wheeled cart”. Until then it had not occurred to anyone that the parish closes might be a destination in their own right. And even then only those at Saint-Thégonnec, Guimiliau and Lampaul-Guimiliau, were thought interesting enough to visit. It was not until after the Second World War that other villages in the area began to draw attention to their churches.

Early travellers did not always appreciate the enclos, either denigrating them as “barbarian” or ignoring them, but among those who valued them were sculptor David d’Angers, who in 1844 was moved by the “expression of deep conviction” of the calvary at Saint-Thégonnec; and artist Eugène Boudin, who first went to Brittany in 1855 and drew the porch at Plougastel-Daoulas. 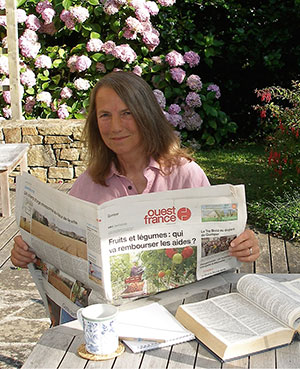 In the north-west corner of Brittany, an area known as Finistère, dozens of ancient chapels attest to the erstwhile importance of faith in the region. Celtic myth and Catholic belief underpin life and community in this remote part of France. ...
Read More →
Related article

In the heart of the City of London, there used to be all manner of Strangers Churches (as churches for foreigners are commonly termed). There was a Spanish church, a Scots church and a Lutheran church from Hamburg. The Dutch community at Austin ...
Read More →
Related article

The UNESCO World Heritage List features many ornately decorated churches across Europe. The List includes the painted monasteries of southern Bukovina (described elsewhere in this issue), as well as murals on churches in Switzerland, Bulgaria and ...
Read More →
Log In