Hiraethog: the hills of solitude

The Wikipedia entry for Mynydd Hiraethog is slim. So minimal in fact that, acre for acre, this Welsh wilderness must be the least interesting place in the British Isles. Philip Dunshea knows Mynydd Hiraethog well, having grown up in the shadow of this moorland region. In this article, Phil reflects on the lonely landscapes of the area known to English speakers as the Denbigh Moors.

Growing up in St Asaph, half way up the Vale of Clwyd, the Denbigh Moors hovered all day long on the edge of sight. Not usually visible, they made their presence known in the way the land climbed toward the south-west, from the ferment of fields and woods to a skyline where the land’s colour darkened into flinty disquiet. Bad weather, which was common, usually came from that direction.

One memory is the last moment of a January evening when, aged perhaps twelve, a walk took me up into a fold of the hills on the eastern side of the vale. The day had been a bright one but the gorse was misted over with the previous night’s frost, the ponds still frozen to their depths. Behind me the crows in the beech woods at Tremeirchion lapsed to fidgety silence.

As the land crackled into wintry darkness I pulled up on a high shoulder of land and turned into the vanishing light of the west. Everything ahead was under what William Butler Yeats rightly called “the cold and rook-delighting heaven / That seemed as though ice burned and was but the more ice […].”

The Denbigh Moors stood across most of the scene, a strait of frozen shadow, but their foreshortened emptiness merely drew the eye wandering on to the far-off procession of the Gwynedd mountains, fifty kilometres away. Amidst the hills the sunset gleamed like the windows of an icebound ship. Darkness came, but that memory is as hard and polished as they come.

We went up to the eastern moors for sledging sometimes, late afternoons when we shuffled through silent forests while the skies bruised over our heads. In summer we spent days wandering between the old burial mounds above Llyn Brenig, or fishing on the lake’s table-like expanse. One August some of us crossed the entire upland from south to north, arriving home to a hero’s welcome after three days. But mostly we nosed about the moor’s edges, chasing the tributaries of the Elwy and the Clwyd up into their valleys, and backpedalling home when it started to get dark.

The places we knew best were further up the Elwy and, beyond that, on the Ystrad, one of the Clwyd’s tributaries. Here the streams wandered amid limestone bluffs where crags rose like skerries from the woods, shut out from the world by an untraceable confusion of shortcuts and hidden paths. Time in those valleys had the feel of perpetual autumn, the rising meadows tapering into chase and holt where the reach of the farms and villages seemed faded, and the soil soured and grew thin underfoot so that black, mossy rock thrust out between the tree roots. Up here fences went unrepaired, signposts were grown over with brambles. From the moors above, dampness seemed to seep down into the stonework of old monuments that stood among the trees. In those woods there was the half-nervous thrill of the frontier, and no-man’s-land beyond. 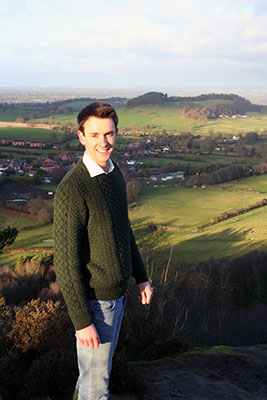 Philip Dunshea is a specialist in Brittonic history at the University of Cambridge. He has written on the literary and historical landscapes of post-Roman northern Britain. And his slightly less-academic alter ego weaves words which evoke the spirit of those landscapes today. Find out more about Philip and his work at www.philipdunshea.webs.com.

Wilderness is a wonderful thing. The American illustrator and writer Rockwell Kent understood how wilderness tugs at the soul: "I crave snow-topped mountains, dreary wastes, and the cruel Northern sea with its hard horizons," he wrote. Yes, we know ...
Read More →
Related article

On the edge of Burgundy: the Morvan hills

There is one very distinctive area in the north-west reaches of Burgundy. And that's Morvan - an upland block defined by its striking granite landscapes which communicate a sense of wilderness not encountered elsewhere in the region. We touch down ...
Read More →
Related article

Welsh settlers landed on the Patagonian coast in 1865 to create Y Wladfa (literally 'the colony') in the Chubut Valley. Within little more than a generation, most of the Welsh migrants had moved inland or left South America altogether. But a veneer ...
Read More →
Log In