Samosas on the Terraces

Britain's Asian communities are woefully underrepresented in professional football, whether as players or on the terraces. Emma Levine returns to her home city of Bradford to report on an initiative to promote diversity on the terraces at Valley Parade Stadium.

Mercifully the rain had stopped by the morning of match day in Bradford, a city in northern England. I had travelled the previous day by train from London and the rain had been relentless with gunmetal, intense grey skies, so I was relieved that the 300-km trip to watch my beloved Bradford City Football Club wouldn’t be wasted.

That journey to Bradford was something of a sporting pilgrimage. The football team is the only connection I retain to my birthplace, a city that my family left in 1985 to move to nearby Leeds. In later years I was to live far further afield in Asia. Bradford became but a memory — bar for the football, for I’ve always had a soft spot for Bradford City, a team affectionately known to its supporters as the Bantams.

Bright and early at 9.30 am, I headed along to a small Bangladeshi cultural centre in Manningham, in the heart of the city — a neighbourhood with a large South Asian population. It’s next to Valley Parade, home of the football club since its founding in 1903, and opposite the green-domed Tawak’kulia Mosque. Radiating from here are streets of dark stone back-to-back terraced houses, with emerald Yorkshire hills beyond.

Inside the cultural centre I met a tracksuit-clad Humayun Islam in the noisy sports hall. He was surrounded by a sea of young Asian boys, kitted out in a medley of football tops and shorts. Humayun was busy, splitting up the lads into four teams.

“We used to have little football sessions at this centre four years back,” explained Humayun, “where me and my friend Shahidoor brought our own young sons on a Saturday morning. Since then we’ve built it up slowly, and now can get up to 100 kids — girls also.”

In 2014, Humayun was visited by Anwar Uddin, a London-based former professional footballer. “Ten years ago when I played for League 2 clubs like Barnet, and Dagenham & Redbridge, we had matches at Valley Parade,” explained Anwar when I met him at his London office prior to my trip to Yorkshire. “Bradford City is a great club — great history, big support and a fantastic stadium. As one of the only Asian lads playing professionally in England, I thought that with such a big Asian community right next to the ground, there would be locals watching me play. But they weren’t, and I was amazed,” he admitted to me. “This issue of playing at Bradford always stuck with me.”

After retiring from the game, Anwar got a job with the Football Supporters’ Federation (FSF) who tasked him with developing a campaign to make football as diverse as possible, working from the bottom up. “I created the campaign Fans for Diversity, and one of the first things I did was to go back to Bradford and meet with people from the club.”

It was that first meeting between Anwar and Humayun that led to the Bangla Bantams; the group was founded in February 2015.

This is just an excerpt. The full text of this article is not yet available to members with online access to hidden europe. Of course you can also read the full article in the print edition of hidden europe 53. 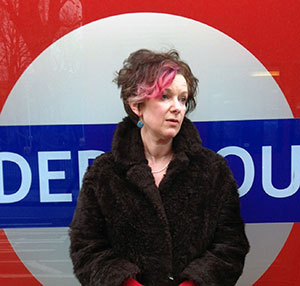 Hailing from Bradford, in northern England, sports-lover Emma Levine has always had a thirst for adventure. After graduating in 1991, she headed off for solo travels in Asia for 'a few months' and it ended up being eight years. She developed a fascination with Asian sporting culture, and wrote and photographed her first two travelogues, on grassroots cricket culture in the Indian subcontinent.

Shortly after was a one-year trip on a meagre author’s advance around Asia’s far-flung regions, including Pakistan, Iran and Kyrgyzstan, to document Asia’s traditional sports that are still played. This resulted in her travelogue, A Game of Polo with a Headless Goat, which was later developed into a six-part documentary for National Geographic Channel, A Different Ball Game, which she wrote and presented.

Now based in London, Emma works mainly as an independent travel writer and editor, including writing guidebooks, and makes frequent journeys to Turkey, India and the Middle East. Her most recent trip, visiting Kosovo, Albania and Macedonia for the first time, made her realize that her thirst for solo adventures on a budget is alive and well. And she still tries to follow local sports wherever she travels. Find out more about Emma’s work at www.emma-levine.com.

Between East and West: The Ukrainian City of Lviv

The city of Lviv, located in the western reaches of Ukraine, is in many respects a classic central European city, a place which has more in common with Wien, Trieste and Budapest than with other cities in the former Soviet Union – of which Lviv was ...
Read More →
Related article

Berlin is a city freighted with historical baggage. Should any city have to bear so weighty a historical burden? Nicky Gardner reflects on how Berliners handle the multiple historical narratives about their home ...
Read More →
Related article

Think of writers who are intimately associated with a particular city: Kafka and Prague, Joyce and Dublin, Svevo and Trieste... or Pessoa and Lisbon. Pessoa did for Lisbon something which few other leading writers have done for their home city. He ...
Read More →
Log In